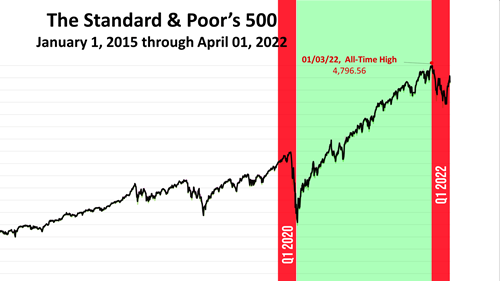 Snapping a seven-quarter win streak, the stock market suffered a -4.6% loss in the first quarter of 2022.

The last losing quarter for the S&P 500 was the first quarter of 2020, when the pandemic hit, and wiped out 20% of the value of stocks. 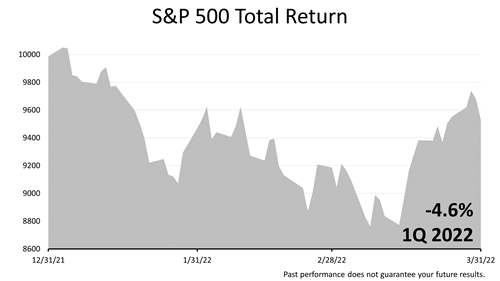 The stock market has been more volatile, as inflation has raged stronger than in four decades, and the Ukraine invasion exacerbated the situation by causing oil prices to rise higher.

One quarter is a snapshot in time. You cannot read much into a a single quarterly performance number. 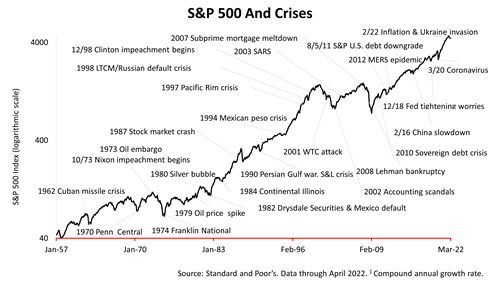 The U.S. stock market, the main equity-building investment of the world, has continued to rise despite the onslaught of crises that have plagued modern history.

We suggest thinking of the inflation crisis of 2022, which comes on the heels of the Ukraine crisis, a test.

Selling stocks in the midst of a crisis is very likely  to result in missing the recovery.

History indicates that the best strategy for long-term wealth-building is to stay put, even if it’s hard to do. 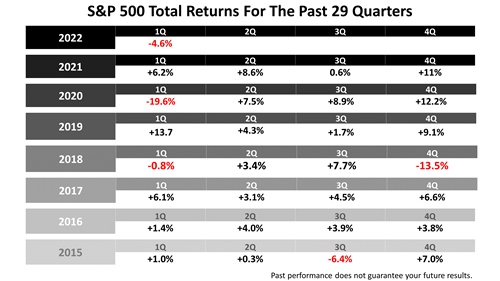 Here’s more perspective for how this quarter fits in with the long-term history of stock investing.

This table shows how often a losing quarter has occurred since 2015.​

The stock market since 1926 has averaged slightly more than a +10% annual return.

That’s about an average return of +2.5% per quarter since the inception of Wall Street and the modern stock market.

This table shows the returns in each of the last 29 quarterly periods, seven and one-quarter years.

To be clear, two-thirds of the past 29 calendar quarters showed above-average returns.

Amid a period of above average returns. the market loss of -4.6% in the first quarter may not seem like such a bad loss.

But past performance is a not a guarantee of future results, and there is a risk the pattern of intermittent losses shown here will not be repeated.  ​

That risk is precisely why the stock market has rewarded investors with much greater returns than risk-free government backed Treasury Bills for many decades!​ 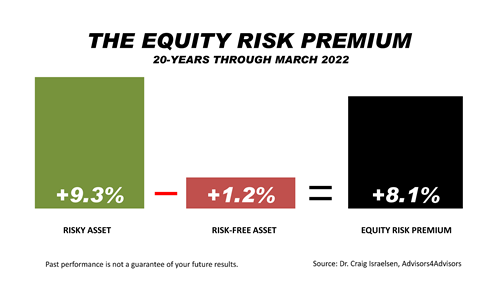 ​With the 12-month inflation rate at its worst in 40 years, the Federal Reserve hiking interest rates, Russian dictator Valdimir Putin threatening the American-built geopolitical balance in place since World War Two, investing in stocks may seem riskier than normal but keep things in proper perspective: ​

​The U.S. stock market is always risky and unpredictable and that’s why it’s been such a profitable long-term investment for nearly a century;  stocks represent just one investment in a diversified portfolio, key fundamentals driving economic growth are strong, and since the March 23, 2020 bear market low, the S&P 500, America’s largest publicly investable companies, is up 68%!

​Stocks, as measured by the Standard & Poor’s 500, in the 20 years ended March 31, 2022, averaged a +9.3% annual return, nearly seven times the +1.2% annual return on the risk-free 90-day U.S Treasury Bill.  Backed by the full faith and credit of the U.S. Government, T-Bills are considered a riskless investment, while the value of stocks is subject to ups and downs and, in theory, your entire investment could be lost in stocks.

Subtracting the return on T Bills from the return on stocks, the resulting 8.1% is the premium paid for taking the risk of owning U.S. stocks over the 20-years. To be clear, investing in America’s 500 largest publicly-held companies earned an average of 8.1% more annually than a risk-free investment in the past 20 years.

This 20-year period encompassed three frightening bear markets -- the tech crash of 2002, the financial crisis of 2008, and the Covid downturn of early 2020.

Past performance is no guarantee of your future results and that, paradoxically, is precisely why investors are paid a premium for owning stocks.

Yes, stocks are risky and past performance is no guarantee of your future results! That is precisely why stocks have returned 8.3% more annually than U.S.-Government-guaranteed investments  through three bear markets and financial crises of the past 20 years. 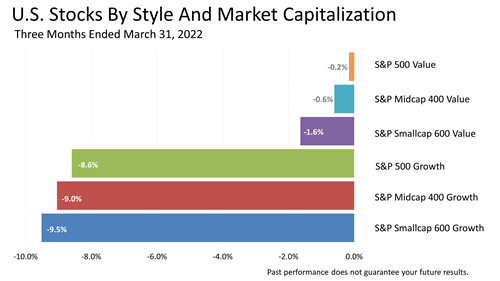 As one might expect, the riskier stocks were hardest hit by the stock market pullback. Small-cap growth stocks declined in value by -9.5%.

Large-company stocks that are less dependent on growth declined the least, with the S&P 500 value stock index falling a scant two-tenth of 1% last quarter. 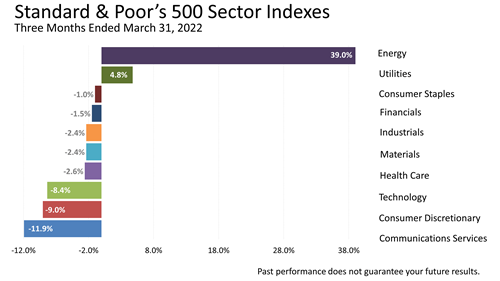 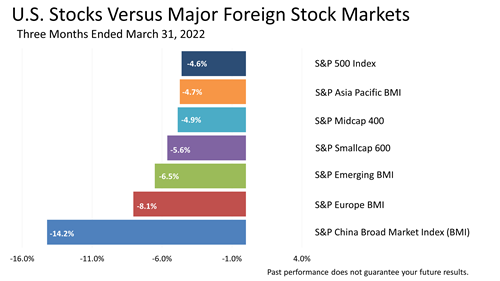 If you thought the U.S. stock market was hard hit by the continued disruptions caused by the pandemic, Chinese equities dropped more than three times as much.

China’s policy of zero-Covid tolerance has resulted in lockdowns for weeks in its largest cities, adding to manufacturing delays affecting consumers worldwide. Europe’s stock market index suffered on worries about the impact of banning imports or Russian oil. Germany, by far Europe’s largest economy, is heavily dependent on Russian oil. 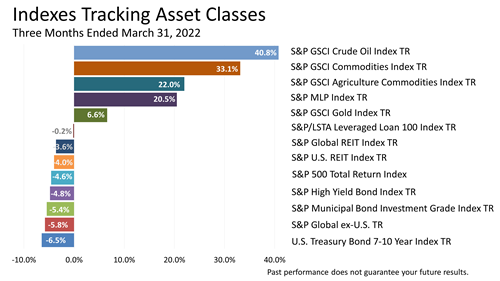 Of 13 distinctly different asset classes represented here by stock indexes, oil was No. 1 in the first quarter of 2022, with oil prices rising as Russia’s pariah status spread across the globe. Meanwhile, the world’s No. 2 exporter of grain behind the U.S., Ukraine, unexpectedly had to shut down its agriculture business to fight an existential battle for its statehood, which sent prices of agricultural commodities higher. 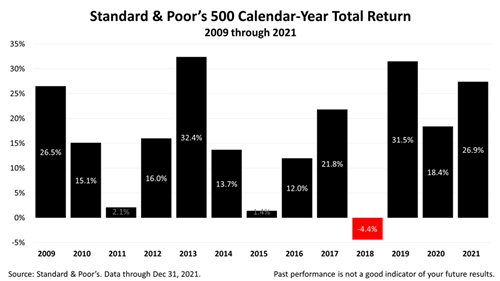 Here’s a good way of looking at the first quarter loss of -4.6% on the S&P 500 stock index in an historical context.

The 10-plus year expansion that erupted after the global financial crisis of 2008 was a period of spectacular annual gains.

Then came 2021, when the Standard & Poor’s 500 stock index, with dividends reinvested, returned an astonishing 26.9%!

That was the third consecutive year of extraordinary gains for the stock market, especially when you consider 2020 was marred by the pandemic. ​ 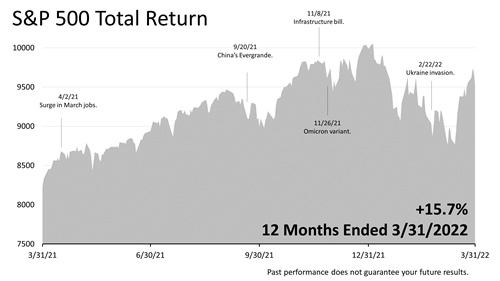 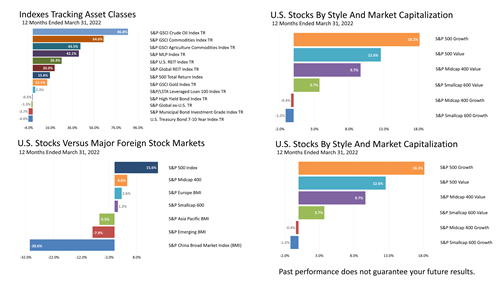 In the 12 months ended March 31, 2022, stocks continued to beat bonds. Energy and commodities companies, which go in and out of fashion unexpectedly depending on supply disruptions and the economic cycle, beat stocks handily.

U.S. stocks bested foreign bourses in the 12-months, and large-cap growth stocks again led U.S. stocks when looked at based on market-capitalization and their growth versus value characteristics. 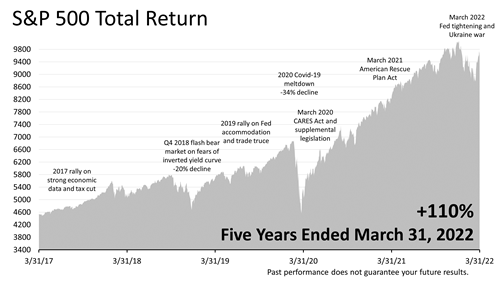 After trading sideways for in 2015 and most of 2016, the stock market broke out after the November 2016 election. It rose steadily to new peak on September 20, 2018, and then nosedived -20% at the end of 2018 after the Federal Reserve hiked rates, which raised fears that an inverted yield curve was imminent. It was a Fed policy mistake, that was acknowledged by the Fed chief.

Stocks rallied and next peaked In February 2020. Then the COVID-19 virus threw the economy and stock market into a meltdown.

Government action to add liquidity to the economy through aid payments brought about a swift turnaround that began in late March.

By early September 2020, following the enactment of the CARES Act and related legislation, stocks hit a record all-time high.

After a pause, stocks rallied steadily from the November 2020 election through year-end.

The March 2021 enactment of the $1.9 trillion American Rescue Plan Act extended the rally, which continued through the end of 2021 despite the Omicron COVID variant.

Stocks turned down in the first quarter of 2022 on Fed tightening and Russia’s invasion of Ukraine. 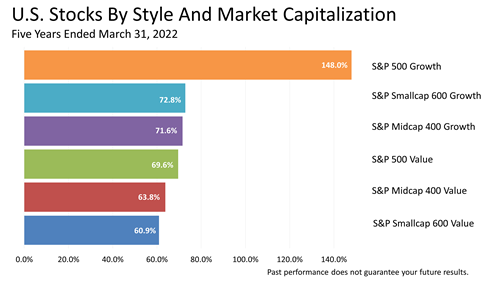 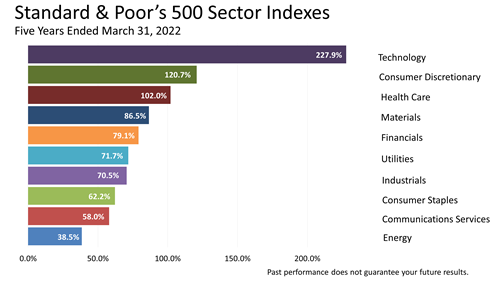 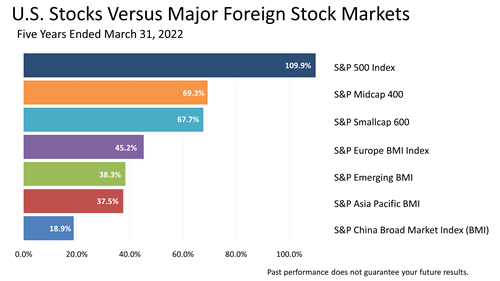 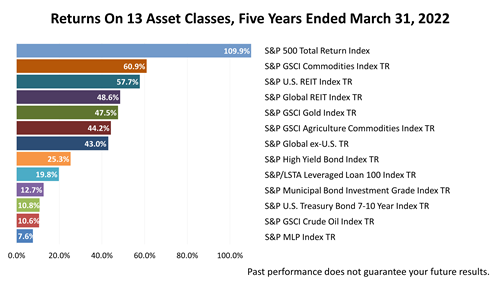 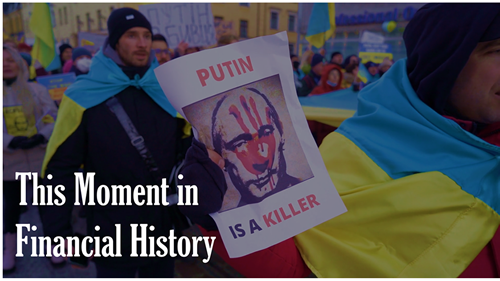 Russia is challenging world order, inflation is at a 40-year high, and a stock market correction has been underway. The relentless progress of the United States is being tested once again. Here’s an important perspective on this moment in financial history.

In that moment, which preceded the advent of vaccines, no one knew the bear market was over. No one knew the stock market would appreciate by 71% in the next 21 months. In the throes of the Covid crisis, no one expected the U.S. government would embark on the largest transfer payments programs since The New Deal.

In that fraught time, no one predicted that the American consumer’s balance sheet, two years hence, would be stronger than ever in modern American history. Nor did anyone foresee that the Covid-19 would be managed much like the flu.

The difficulties are likely to hinder stock returns in the months ahead, which is why we have done our best in this presentation to help you look beyond this bleak moment in history. 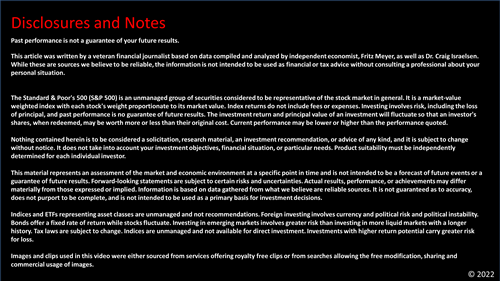 By using Empire State Financial Inc. you agree to our use of cookies to enhance your experience I understand